18. Drank, lots, some hooters and ‘activism’ over public transport

I went to see a short devised piece by second year students. An interdisciplinary project between theatre, dance and 3D design. Their brief was to look at Singaporean blogs and select a popular topic which to make a piece about. They chose the most popular of all the blogs, public transport, the MRT (underground) in particular.

If anyone has ridden on the MRT you may be surprised to find there are any complaints. It’s hyper clean, fast, occasionally breaksdown (sometime you may have to wait for as long a 5 mins for a delayed train), it’s cheap (I put $10 (£5) on a card two weeks ago and made quite a few MRT and bus journeys and have still not spent half of it) and the carriages are wide, long, and pretty spacious. But this piece last night presented the antithesis of the above.

They drew on the blogs which complained of overcrowding, expense, delays, the fact that people who are entitled to (elderly, pregnant etc) will insist they have the reserved seat even if others are free, having to stand behind the yellow line etc etc. In the discussion afterwards it was clear that sometimes people got fed up of being told which seat they can or can’t sit in, that common sense has disappeared, that Internet on the system means no one communicates with each other (I have never ever seen so many phones in use in one place) and that they don’t want, or need, to be told to stand behind the yellow line.

Now, I reminded myself that to compare one system/country with another is ridiculous, each country should work to make everything they do the best and eliminate even the smallest niggle, a point the group raised last night. It is a pointless discussion to compare the Underground with the MRT for instance. I thought it was more interesting that there was not overt comparison of MRT with other issues of contention here, that the complaints were not put in a wider context. Again, a question that was asked and a challenge that was thrown down.

What I did find interesting was that as young people (late teens, early twenties) this was the subject they felt they wanted to make an activist piece of theatre about. However, it is important to remember that Singapore is, on the whole, a very comfortable place, that’s how they have made it, and who can blame them? There is an economic, cultural, ethnic man made balance here which needs to be maintained. It is a one party state (50 years next year) which has built an impressive economically successful, vibrant, exciting, perplexing, beautiful country and equilibrium is maintained. And it’s citizens want to maintain it, their livelihoods depend on it. And who wouldn’t want this level of security if we could have it?

In retrospect the piece was interesting for what wasn’t said, what topics weren’t picked. And later, having repented of my suggesting that the subject was trite, I felt that there were some general words of fundamental dissatisfaction coming out through a very safe issue.

But, of course, don’t forget I’m an old cynic. Probably from having grown up in the 70s and 80s where every piece of news was a cause for protest.

‘I shall not reason or compare’ Blake

After the piece me, Matt and a couple if the actors from The Misanthrope went for a drink down Clarkes Quay and ended up in Hooters! That was a surprise. Unlike the UK version it is not full of stag parties but is in fact a family bar, the girls are relatively modestly dressed, and the hooters aren’t…hootering. A much more civilised affair. Cracking night though and nice to chill with the actors also.

Today – fantastic walk up to Bukit Tima a nature reserve, the highest natural point in Singapore (160m) and primary rainforest. Was so lovely but bloody hot. Sweat sweat sweat. Running my pants through in the bath as we speak. 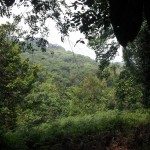 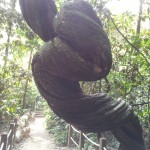 Not working today and really trying hard not to. Just stop for a day. Want to sit and read.