I’ve been a bit slow this week on the old blogs. I’ve been getting back late as rehearsals have been going on until 7 to make up for the New Year ‘bank holiday’.

I’m really enjoying working with this group and their challenges, encouraging me to find new ways of helping students to push themselves and produce work which is different from what they would normally do, to be more imaginative, creative and, I hope, take some personal risks. It hasn’t, however, stopped my terrible bad language nor reduced the ridiculous amount of colloquialisms I use; I didn’t know I knew so many.

It’s pretty incredible how these students are developing skills in a language which is not necessarily their first, tackling Crimp’s complex structure and wide vocabulary and learning new performance skills at the same time. It does feel bizarre asking for greater diction and clarity from them and working on text that is so English. It is even more confusing when the piece is set in Singapore so I am asking them speak in their own accents but with clear English.

I also enjoying the cosmopolitan rehearsal space and being the one on the back foot, they’re pretty good at educating me, persistent anyway. They’re full of suggestions of what I should,be eating, where I should, be going and seeing. They’re also good at taking the piss out of me; they caught onto that quickly.

Today they brought into rehearsal rojak, food, and a bit of a weird one. Here is the official description. 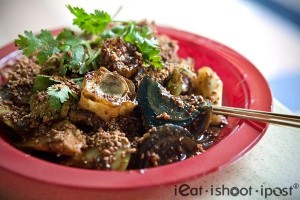 “Rojak is a local salad of mixed vegetables and fruits, drizzled with a sweet, sour sauce made up of local prawn paste, sugar and lime. Rojak in Malay means “mixed”, but the dish exemplifies the cultural diversity of Singapore, including Chinese and Malay elements in the ingredients. Often eaten as a side dish or an appetiser, rojak can also be served as a main meal”.

Sort of nice, and sort of very not. Fruit, vegetable, prawn paste – what’s not to like?

Tomorrow I have the diploma students for a couple of hours for a workshop which I hope will be of help to them and maybe inspire a bit too. I’m trying to get them to enjoy the spontaneity of reacting and playing as a means to develop insights into the characters they create, take the ‘nailing down’ out of their work, or at least putting a bit of suspense and unpredictability into it.

Things that annoy here – crisp packets that are so glued together you can only open them with scissors or a knife.

There is a warning that haze is on its way from Indonesia. They have apparently started their burning season early and because of the unusually dry weather we’re having here its ideal for the smoke to come over, it is an annual annoyance but may be happening sooner rather than later. Sounds a bit unpleasant and by all accounts very thick.