My morning treat was a visit to Raffles museum. A small but fine reminder of the hay day of this cultural icon. A record of the people that passed through Singapore on their tours, the great cultural and political figures (Coward, Maugham), plus a symbol of an important constant through the country’s growth.

Raffle’s is a beautiful hotel; it’s the template for the colonial architecture of South East Asian, it’s the original. However, about a hundred years ago a massive complex was added to the rear which was relatively architecturally sympathetic. Two levels of white balustraded galleries, Escher stairways, palm courtyards and fountains, and a small room housing the museum. Of course, the problem with the is extension is it is filled with the ubiquitous ugly, prestige shops; Louis Vitton et al. Repellant emporiums of over priced tat.

Any hoo, could I find the museum? Could I buffalo. I wandered every terrace, but nothing. I eventually visited the Raffles gift shop (you can imagine the contests thereof) to ask its whereabouts and was told it had closed. Gone. One small remnant of an historical curiosity which played a compelling role in Singapore’s past, gone. No one interested apparently. No one needs history it seems.

It is a recurring issue here that frustrates me, history does not seem to be considered important. There was even a recent debate considering the introduction of early Singapore history into to schools education, early being pre 1300!

This corroborates Lee Kuan Yew’s comment after the 1965 independence that ‘There is no history’. Singapore as a new country which started from then. A comment that may come back to bite him, or his decedents in the bum, as it so often does.

Modernity is all very well, exciting, vibrant, changing, it brings choice, prosperity, security, but the human animal craves and needs connection, with its heritage, family, place, responding to a long genetic and cultural memory; it has to feel rooted. It seems Singaporeans have this in their homes retaining their own cultural identity, language, traditions, food etc but is it there in the communal Singapore? Or is it needed? Maybe there is not need for a shared history, their own histories are enough.

It is a relatively new concept as a state, nearly 200 years old, but an exciting, well documented and international history. One that should be trumpeted as a testimony of how multiculturalism can work and not ‘closed’ or demolished. You can’t expect a county to live in the past but there is a feeling there that the ‘new’ is always best but the ‘new’ is nothing unless it’s placed in context.

Today I am officially melting and consequently slowing down, sweating like I’ve never sweated before and therefore becoming grumpy Englishman. Had to sit down before I fell down.

I was sweating so much as I made my way up to Pete and Ali’s to see their youth theatre do Animal Farm. It was a good, I enjoyed it. Really sparky energised group, simple storytelling, good physical stuff, well done to all of them. 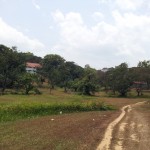 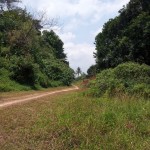 My route there and back took in the old railway line from Singapore to Bangkok, now closed down but greenway for walking (for the time being no doubt), but bloody hell it’s exposed and hot. I was also overdressed as I was heading straight to a concert at the Esplanade (more tomorrow on that) and then up the ‘ship’ hotel building or to give it it’s proper name, Marina Bay Sands Hotel. 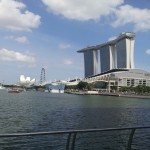 The boat on the top is where we were heading 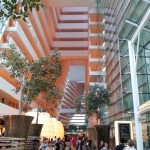 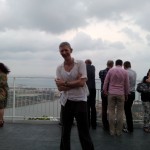 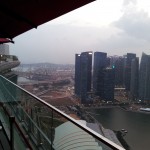 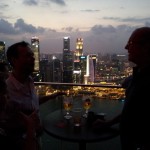 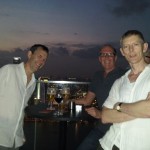 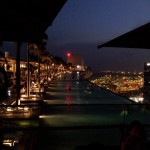 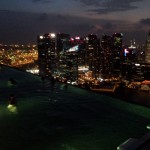 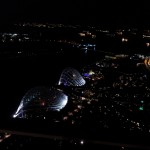 The domes I was in last week, but from above

It really is an incredible space. A lift which takes about 20 seconds, if that, to travel 57 floors, is pretty impressive too. Also ear popping. The vertigo kicked in very quickly, but then the sheer curiosity and stunningness of the view sort of took over. A swimming pool which looks like its pouring over the edge that you can swim right up to, bars,restaurants, gardens. Views over to Malaysia and Indonesia, views of the total city – breathtaking. What struck me most was the number of ships heading to and from the port. Hundreds and massive. The sea was crowded with them, it is a phenomenally busy shipping lane, I have never seen so many ships together and the sea just lights up at night with them all.

You really get to see the sprawl of the place, the size of the skyscrapers and the huge amount of building taking place way into the distance, covering the whole island. A bit scary really, mile upon mile of tower blocks.

We had intended to go up for the sunset, but, sod’s law, it was cloudy, but nonetheless still amazing.

Afterwards, a jaunt up to somewhere and more drinks and food next to the river before, another jaunt back through the city to the hotel. It is a very exciting to drive about at night, the buildings just light up, one covered in tens of thousands of LCD lights and making…art? Don’t know, but looked great. Also got to see the regular laser show that takes place on the top of Marina Bay Sands, but from ground level.