With Matt, Huang Ying and Jim up to Malaysia for an overnight trip to experience a brief flirt with the periphery of the the ‘hippy trail’, albeit only just making the trail.

Melaka is a UNESCO world heritage city and although it’s a fair sized city, the interesting visitors bit is just a few small streets down by the sea. It’s oddly unimpressive, its not got wow factor but it has detail, it’s small, chaotic, untidy, intriguing and another melting pot.

This trip has really brought home the island mentality we have in the UK. It’s fascinating spending time in places where there has been a constant toing and froing of nations taking over, invading, leaving etc and seeing how a further culture has grown from it. On the west coast of Malaysia (4 hours drive from Singapore) Melaka is a mix of Portuguese, Dutch, a bit of British no much, a lot of Chinese and of course, Malay. You can see all these in the architecture and in different aspects of the culture. However, having said that, without a doubt the culture that dominates is Chinese. You sometimes have to remind yourself, as with Singapore, that your not actually in China. 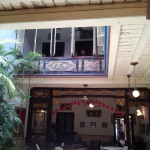 Courtyard of The Baba House hotel 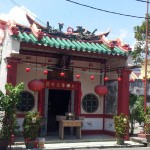 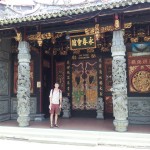 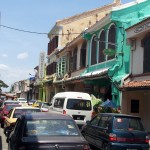 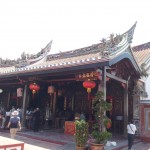 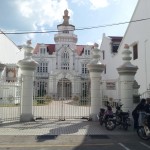 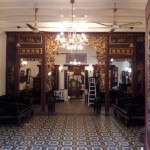 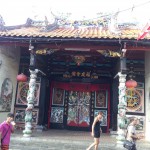 The gridded streets are filled with almost identical shophouses, slim, 2 story buildings with a front shop section, screen, court yard (most now covered over) and further rooms beyond. We stayed in The Baba House, which was three of these joined together (and none to clean either sadly). These buildings are interspersed with mini mansions, temples alleyways etc etc. the buildings themselves have been altered, demolished, improved over the years but all fundamentally the same.

Many of them still retain beautiful original doors, windows, screens, all screaming Chinese, it’s quite incredible.

We put our heads into a dark, cold, labyrinthine reclamation yard which was a mass of furniture, doors, pillars, balconies, beds, jars etc which had obviously been removed from these places over the years. It was a bit unnerving, something of that cultural suspicion of the dark side of the East still left over. 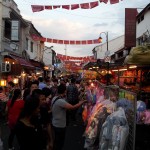 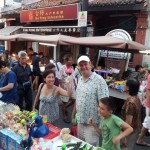 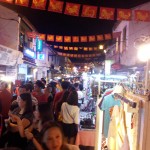 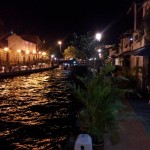 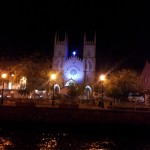 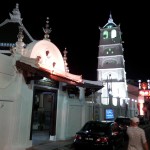 The main street, Jonker Walk, is a mass of souvenir and food shops, a bit tedious to walk up down in the daytime what with cars, but at night it transformed! The road was closed, mores stalls came out and awash with lights, music, crowds it really buzzed, I loved it. Matt and myself drank, then wandered (trying to find the seafront but it appears they don’t want people to get there as there wasn’t a way we could actually find there. We stopped when we reckoned we’d hit mugging territory). However, walking down less touristy streets at night and along the river we saw into peoples homes, doors a jar (often warehouse doors at that), dim light or fluorescent strips on, TVs yapping away, sticks of furniture and ornaments. Home which were not necessarily poor, though I think that is an issue here, but homes which were functional, practical places to live the emphasis seeming to be on outside space rather than in.

The modern existence of this place as a world heritage sight is down to an ex Mr Melaka, Mr Malyasia, Mr Asia and Mr Universe (all one person), Dr Gan Boon Leong, who championed the rescuing a developing of this particular area, and has a statue in his honour, good man. They like their statues here. 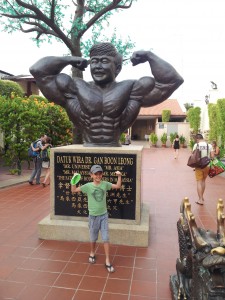 That’s enough for one sitting. Tomorrow Trishaws and the infamous and over prevalent Durian!