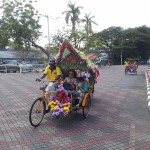 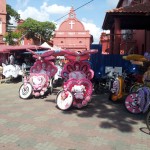 Most memorable and most surprising in Melaka were the trishaws. Outrageously decked bikes and carriages, themed decorated and fantastic. Whole arrangements of plastic flowers, or moulded canopies a la Batman or Malayan house, Hello Kitty (a lot of those), Garfield or just highly ornate hearts and flowers. They are pretty amazing. Some had sound systems blasting out the back which I would find a bit disturbing, but even with that, they were such good fun things. 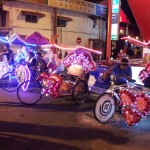 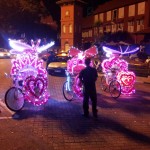 However at night was when they really came to life. We didn’t realise in the daylight but they were all interwoven with lights which made them even more camp and outrageous. Good on the Melakans I say, homosexuality might be illegal but their keeping its subculture alive nonetheless.

I ate Durian! A ‘one bite durian puff’ to be precise. A chocolate-less profiterole with a stinky durian cream inside. Tasted of onions to me but with the wrong smell a kind of rotting smell. It still tasted of onions hours later as it kept repeating. It’s to do with what smells we associate with food, so I can eat a very stinky cheese but that’s savoury, but a fruit which smells like rotting meat doesn’t see quite right. Had to be said, durian is very popular in Melaka, unfortunately. I did eat jack fruit however which I liked and has a similar, though no where near, as strong a smell as durian. The meat doesn’t look like a decomposed brain either. Matt wanted to bring some of the ‘puffs’ back in the car, wisely Huang Ying said no, knowing all too well what an unpleasant 4 hour journey back we would have had.

Back to Singapore and back to last week of rehearsals. Not scary at all!