Bloody hell! Today I went to the nearest I’m likely to get to a paradise beach for a while. Palm tress, golden sand, sea, perfect blue sky etc. Got myself a little umbrella all to myself, hardly anyone around, bit of a swim and loads of reading. I am now going deaf in right ear, which I have been doing over the last few days but the sea swim has done for that proper. You will be pleased to know I can’t over rub your noses in it as I forgot to take my phone, hence no pictures, but I think you know the sort of place I’m talking about. Someone actually slung a hammock between two palm trees, it was idyllic.

Ok, here’s a few google pics to give you an idea. 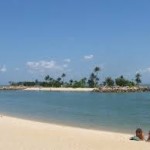 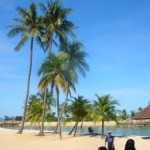 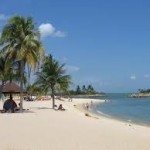 Tanjong Beach is on Sentosa island and at the eastern end of the three beaches and by far the less commercial and least crowded. I arrived midday (cue Noel Cowards song, and there were dogs there) and I left at 2 and it was really quiet despite being mid 30 temperature.

It is, of course, in Singapore style totally man made, apart from the island itself. Everything has been brought in and built, down to the trees and the sand, but it is still very beautiful and I did actually relax for a couple of hours. The view was not quite so beautiful, i.e. dozens of oil tankers, container ships etc a few hundred metres away, but hey ho! I so want to go on a beach holiday now, in Asia, or anywhere; that comment will come as a surprise to a lot of people, not least me.

It’s not a walker friendly island. This time I did walk from the mainland and wanted to schlep to the south side to the beaches but was thwarted by being directed around theme parks, retail outlets, restaurants etc until I gave in and took the monorail. There is a big tendency here to stand still, in doorways, escalators, travelators(!) avoiding steps and movement, you can guess how that can make my temper raise and slows down getting anywhere. There are blissfully unaware of my irritation. However, once I did get to Beach Station I had very lovely kilometre walk down to Tanjong beach.

Plenty of reading and immersed myself in WW2, the war in the East and Malaysia in particular and the British surrender of Singapore. That was a pretty horrible part of the war, a mess in all ways, I’m ashamed to say I don’t realise how awful it was.

I walked back along the beach accompanied by piped music, the boson-ova version of ‘Tea for two’ being particularly memorable, then through Imbiah where there is a ginormous Merlion statue (half fish, half lion) which is the symbol of Singapore, and back into the theme park area. It really is incredibly American with Macdonalds, candy stores, waving attendants on the monorail platforms greeting you, Starbucks (I had a muffin and coffee), which is, of course, everything I hate. It s corporate, plastic, no substance (beginning the sound like that Misanthrope) and every other middle class jibe I can throw at it, however, people out in the sun, families, friends, smiling, laughing, enjoying themselves, so maybe I should ‘ease up on the contemporary morality’ to quote Martin Crimp. Maybe time to ease up a little.

‘What good are all [our] so-called virtues if [we] can’t enjoy their corresponding vices’. Crimp.