How does a novel, full of description, 3rd person narration, past tense and internal complex dramas become theatrical and dramatic? Playing it literally it feels academic and literary so we swapped it into first person but kept it as direct address and suddenly we had an intimate relationship with the characters, they trusted us and confided in us.

One of the most important aspects of this adaptation is preserving the Pymisms, Barabra Pym’s acute, funny, observant, sad comments. Initially we spread them out amongst the other characters but it appeared they knew too much about each other, they were too aware. However, with the comments stripped back to what the three commenting characters might know or maybe surmised, then the observations became playable. The key is that all four characters (three at least as Marcia is more complex) are obsessed with each others lives and therefore can legitimately talk about them or comment using Pym’s observations; it is about choosing which are the right ones.

This method became all the more powerful when it came out of a section of (almost) total naturalism and we suddenly realised we had entered a world inside their heads.

The Movement Director, Kitty Winter, explored patterns – filing, bureaucracy, tea making, lunch time  routines – little ‘dances’ that could be laid under the dialogue, that continues almost regardless of what they are doing. It was great to set up a routine which could be halted, paused, suspended, and returned to as needed. It also gave the sense of a world which wasn’t entirely real. 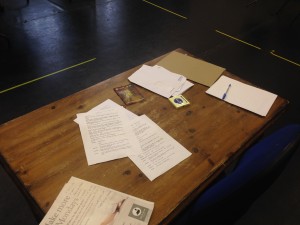